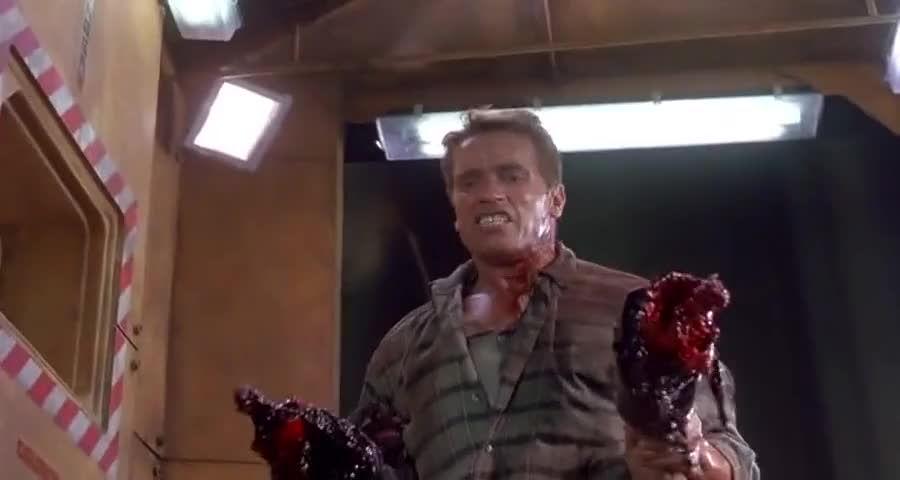 Getting Off on Redemptive Violence

Remember in Total Recall (1990) Richter chasing Quaid up a crowded escalator in the subway station? Four of Richter's henchmen wait at the top, guns drawn, then start pelting some poor schlep in front of Quaid (the indomitable Arnold Schwarzenegger).

Is the guy dead from those first few hits? No time to think about d'at, girly-man! Instead, pelted-guy becomes human shield cuz ... he can't possibly mind at this point, right? A few blood-splattering pelts later, human shield becomes human catapult launched at Richter (Michael Ironside), allowing for another happy escape.

Why the hell did I revel in this gluttony of carnage almost 30 years ago?

For a dominator culture such as ours, there always has to be a “bad guy” and violence is always the way to be rid of them, however temporarily awesome (ahem), I mean distasteful, it may turn out. Theologian Walter Wink first coined the term “redemptive violence” for this imperial-culture phenomenon stemming from the Babylonian creation myth Enuma Elish. Check out Wink's analysis here. Long story short, violence is inherently divine and must be enacted to create order from chaos. Oh and you, mortal, are here to serve the gods and their earthly representatives since—made from violent origin—you're violent, too, and need to be controlled. According to Wink, the basic tenets of this myth went viral into the religions of Syria, Phoenicia, Egypt, Greece, Rome, Germany, Ireland, India, and China since 1250 BCE.

To Wink, redemptive violence is the dominant religion of our society, more so than Christianity or secularism. At first it was a story we came to believe—violence as necessary/natural—but now it's pumped into all cultural pedagogy as mass anesthetizing.

You think Quaid reflected on how he used a guy for a human shield, let alone any possibility of PTSD from holding Richter's ragged, bloody stumps? Total Recall (1990) remains one of the most violent movies ever made.

Again Wink: “Once children have been indoctrinated into the expectations of a dominator society, they may never outgrow the need to locate all evil outside themselves. Even as adults they tend to scapegoat others for all that is wrong in the world.”

I'm not sayin' I'm all grown up. Arnold's Conan the Barbarian remains great mythology I'll probably watch again (despite the black bad-guy trope). But once Raf and I run Recall and T2 through the P.O.C. lens in our podcasts, I'm deleting most of Ah-nold's movies from my digital library.

It's not funny to me anymore to watch Spanish-speaking soldiers stumbling into his bullets in Commando or bufooned Arabs in True Lies, and not seeing any enviable black male character in any of his films. They're either traitors, “bad guys,” or are “good,” but all die in Arnold films ... every time. I don't need reminders of how far P.O.C. representation has come (however grudgingly) since the Reagan-Bush years.