The Not-So-Comfortable Future of ... Last Year 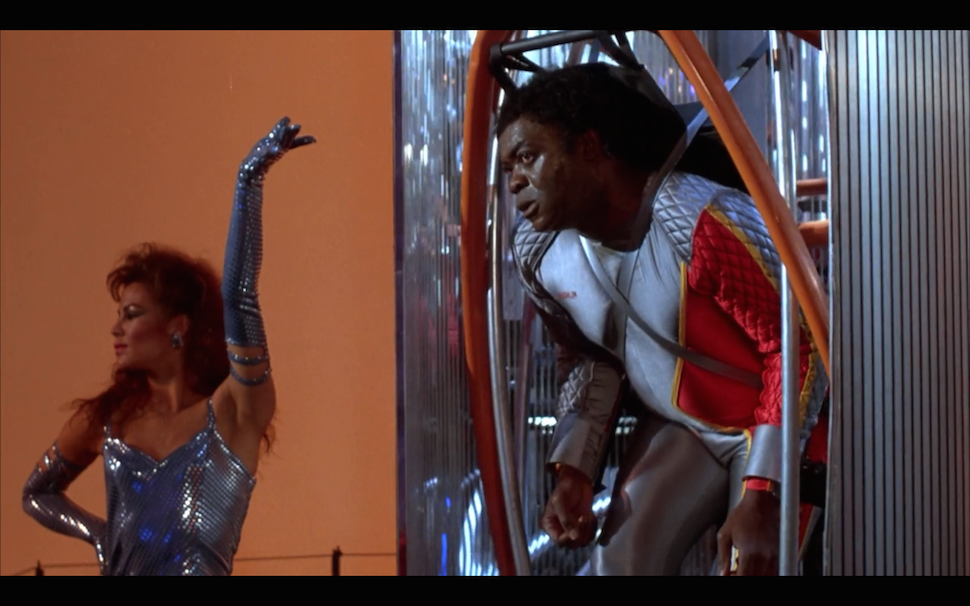 In our latest podcast, Raf and I revisit 1987's The Running Man, a dystopian tale loosely based on the far-superior Richard Bachman/Stephen King short story of a collapsed world economy, food shortages and riots, police state control, shanty-towns of unemployment and poverty, and violent reality-T.V. obsession under-girded by corpo/political/media propaganda, set in the then-30-year-future of 2017. Any of this sounding familiar 30 years later?

Yes and no. A tour of Southern California will include growing numbers of homeless in tent camps. Since '87 we've had two major stock market crashes sprinkled with other recessions here and there, and no indication that economic forces have changed their gambling, corporate-welfare, tax-evading ways so that another global economic catastrophe isn't inevitable. And near-past protests (Occupy, Ferguson, etc.) revealed how our militarized police forces will respond if when the shit really hits the fan.

Still, food shortages? Many people are food insecure, but we're not at the riot stage just yet. Televised death? No, but damn ... those cats in MMA fuck each other up, not to mention NFL football. Police state? Now on that one ... we're only a fill-in-the-blank catastrophe away from martial law, especially if this calamity happens under wanna-be Cheeto Mussolini's watch. The “legal” mechanisms have been in place since 9/11. The world of The Running Man is way closer in that regard than anybody wants to think about.

One thing that has remained the constant though, is how we the people can be so easily distracted—and ultimately influenced—by tools of mass distraction, even as our outer world grows increasingly uncomfortable for an increasing number of people. The movie's antagonist, Damon Killian—hammed-up perfectly by the late Richard Dawson—sums up Bachman/King's subtext explicitly near the end of the film as he tries in desperate vain to evade Ah-nold's impending ass-whuppin':

“This is television ... that's all it is. It has nothing to do with people. It has to do with the ratings. For 50 years we've told them what to eat, what to drink, what to wear ... Americans love television. They wean their kids on it. They love game shows. They love wrestling. They love sports and violence. So what do we do? We give them what they want.”

We lap-it-up like pigs at the trough. There's something (apparently) cathartic about (the gag-inducing) This Is Us, for popular example; a reflection of Obama's leftover “liberal” hope, as much as 2018's most watched television show, Roseanne (before her self-inflicted wounds of ignorance deleted her from her own show), who ... would you argue (?) ... reflects much of Red-country's distain for thought, accuracy, and imagination. Both spectrums deny reality, perhaps one less so than the other.

So even if we do get what we want, is that somehow better? Apparently not, according to this study that links prolonged television exposure to overall discontent and challenged mental/emotional/physical health. It's all feel-good in the moment, until we wake up and low-and-behold, reality still bites and we're still pissed and uncomfortable and want to see that catharsis played out on the violent football field or in the uber-violent octagon on others' bodies, or in the uber-violent video games that essentially train people to be killers. And let's not even get into Reality T.V. humiliation catharsis, porn, on-and-on. Indeed, you can't ever get enough of what you don't want.

The day we see someone burned alive on national television for sport (protesting Vietnamese monks aside) or eviscerated by chainsaw? Well ... we'll know we've lost and writing and reading about this kind of stuff will be moot, or at least very dangerous. Until then, go out and do something out of your comfort zone. First-time salsa dancing, for example, can be very uncomfortable at first but ultimately far more enjoyable than screen sedatives. And who knows? You might even get some real-life dystopian-relieving comfort!

For black/brown insurgents? Yeah, the end will more than likely be very uncomfortable for many. Ask Laughlin in the photo (and Weiss, off-screen, while Ah-nold—even before impending doom—is actually relatively cozy in his rocket-chair). Maybe we don't “win,” but let's at least not do it to ourselves with too much media consumption, yet with more real-life activity with others, regardless of what that looks like and as long as it feels mentally, emotionally, physically, spiritually, and/or creatively healthy. That's really the best way to “fight back”; to be you and me together, however flawed and f'd up that is. Whatever the case, better to be that and not-that-shit on the screen.